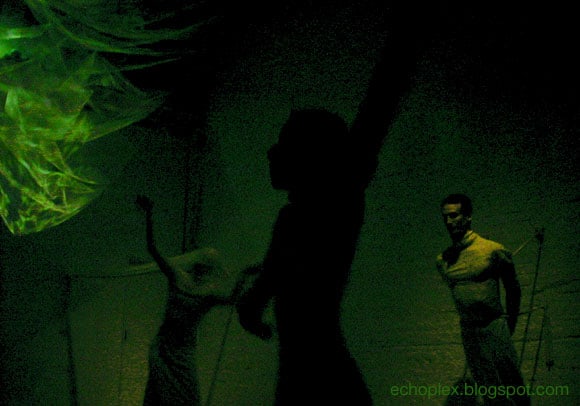 on saturday the cave gallery in williamsburg was completely packed for the opening night of floatingpoint-forest. at 9pm there was a performance with sound by grundik & slava. they mainly manipulated nature recordings and feedback, but used them sparingly and artfully along with silence. meanwhile three dancers played out an excruciatingly slow but fitting tableau of passion and frustration, laden with metaphor which could be taken in several ways. there was a marked contrast between the movements of the three, one of whom could not move at all and wasn't trying. the woman was blindfolded, but had complete freedom for her often violent motions which included confused searching, writhing in apparent agony, and beating the floor with her hands. the third figure was both blinded and restrained as he attempted to reach out in various expressive gestures. there were a few projected video light sources in the mostly bare room which changed depending on the dancers. it was fairly intense and open to many interpretations, any of which could serve as a kind of rorschach test of the viewer.

elsewhere in the gallery, there was another dance performace of a similar nature (more restrictive gauze and green lights), while a noise-rock guitarist improvised over an ominous loop bringing the likes of glenn branca or michael gira to mind. meanwhile, in the back room, we were confronted with a disheveled man acting as a raving lunatic, asking everyone who entered who they were and to point themselves out in cutouts, found objects, or on a map, while surrounded by junk, broken glass, and tv sets showing mostly static. there were also paintings and mixed-media sculptures. a very interesting place to say the least. josh took pictures that will probably come out better than mine and eventually be on his site, along with his other photos from past cave gallery shows.

the title of this post comes from the song candidate by joy division.