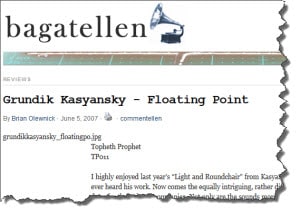 I highly enjoyed last year’s “Light and Roundchair” from Kasyansky (Creative Sources 062), the first I’d ever heard his work. Now comes the equally intriguing, rather different “Floating Point”, based on pieces done for three dance companies. Not only are the sounds more overtly derived from field recordings but to a great extent the structure is more like film collage, briefly episodic and often discomfiting, layering elements heard at various sonic depths atop each other in a manner suggesting images in greater or lesser degrees of focus. There’s spare piano that pops in and out as well, single-noted and vaguely tonal, like a sliver of Feldman. The storm clouds of static from his earlier release still appear, but only momentarily as do scattered voices, dog barks, various weather-related phenomena and intimations of other “standard” instruments. Periods of silence or near silence fall into place throughout. Those who like a dollop of “music” with their field recordings will find a treat here.

Descriptive listing doesn’t really do the work justice however. It’s more the creative positioning of the sounds, the subtle psychological impact that they, so arranged, may or may not have on the listener. While of course this applies to any music, the sort of dream logic employed in works like this will succeed or not on the subjective associations made by the listener, whether or not the transitions ring true and the sounds chosen feel right. I found myself increasingly drawn in on each hearing, more readily summoning captivating visual images to mentally accompany this soundtrack. A fine album.