Neurozine, for electronics and birds 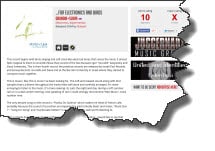 This record begins with birds singing and soft clock-like electrical tones that caress the mind. It almost feels magical to listen to Grundik+Slava that consists of the two Russians Igor "Grundik" Kasyansky and Slava Smelovsky. This is their fourth record, the previous records are released by Israeli Fact Records and Earsay Records. Grundik and Slava met at the Bar Ilan University in Israel where they started to compose music together.

This is music I like; this is music I've been looking for. The soft and relaxed sound along with bird samples that's a theme throughout the tracks feels well done and carefully arranged. It's never annoying to listen to the music, it's more relaxing. Its suits the night and day, during a soft summer rain or in a dark winter evening. And speaking of rain I could strongly recommend "Rain Music", track number nine.

The only deviant song on this record is "Pianka Do Golenia" which makes me think of French cafes, probably because the sound of accordion accompanied by electronically beats and mixes. "Music Box 1", "Song For Dong" and "Inarticulate Pattern" is some other songs well worth listening to.

With a simple design it's a really beautiful record that catches the attention. I would like to say that this is beautiful and well done all the way through, both musically and visual.