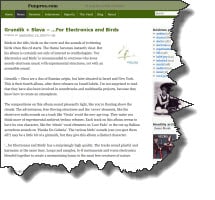 Birds in the title, birds on the cover and the sounds of twittering birds when this cd starts. The theme becomes instantly clear. But his album is certainly not only of interest to ornithologists. 'For Electronics and Birds' is recommended to everyone who loves moody electronic music with experimental structures, yet with an accessible sound.

Grundik + Slava are a duo of Russian origin, but later situated in Israel and New York. This is their fourth album, after three releases on Israeli labels. I'm not surprised to read that they have also been involved in soundtracks and multimedia projects, because they know how to create an atmosphere.

The compositions on this album sound pleasantly light, like you're floating above the clouds. The adventurous, free-flowing structures and the 'rawer' elements, like the shortwave radio sounds on a track like 'Virola' avoid the new age trap. They make you think more of experimental ambient/techno releases. Each track on this album seems to have its own character, like the 'ethnic' vocal elements on 'Lost Fado' or the cut-up Balkan accordeon sounds on 'Pianka Do Golenia'. The various birds' sounds (can you spot them all?) may be a little bit of a gimmick, but they give this album a distinct character.

'...for Electronics and Birds' has a surprisingly high quality. The tracks sound playful and harmonic at the same time. Loops and samples, lo-fi instruments and warm electronica blended together to create a mesmerizing hymn to the most free creatures of nature.